The ferryport group
Condition Based Monitoring (CBM) Introduction
Through the use of a CBM system we aim to reduce the amount of time lost to production due to maintenance issues. Basically, we are aiming to eliminate breakdowns by fixing the problem before it occurs. We aim to succeed in this by doing a little bit of maintenance when it is convenient rather than a lot when it isn’t.

Sometimes it is also called Total Preventative Maintenance, however the ‘Productive’ covers Preventative, Reactive (what you do when a breakdown does occur), and Predictive (the use of analysis, vibration detection, condition monitoring etc.) Maintenance.
We will be covering all of these areas. You may ask ‘why will we consider Reactive maintenance if we are eliminating breakdowns?’. There are non-value added checks to consider - checks that take longer to perform than it would take to fix a problem, for instance checks that may require the machine to be stopped where the stop-start sequence takes longer than the repair.
Some aspects of Predictive tend to be implemented through bespoke and specialist use of equipment, where all that you really have to do in the main is wait for the machine to tell you that something is going to go wrong. (In the day-to-day use of TPM, most predictive maintenance makes good use of electronic indicators.)

A lot of the time people talk about ‘Bathtub Curves’ - these are a visual aid when trying to describe the various types of breakdown causes, and they look like the following: 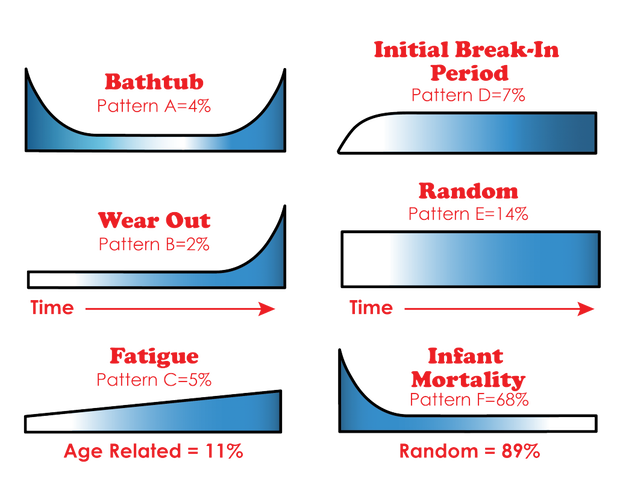 ​(This is a fairly standard diagram and can easily be found on Google.)

Bathtub Curves – about 11% of breakdowns are age related, the rest are random, however a
​good predictive system can help reduce this 89% significantly
When the failure rate is shown on the vertical axis and time on the horizontal axis, the curve of the failure rate looks like a bathtub, hence the name – ‘a bathtub curve’.

Early Failure
This is the period where relatively early failures occur following the first operation of a device, and is characterized by a gradual decline in the number of failures over time. This phenomenon is caused because products with latent failures cannot be completely eliminated during the manufacturing process – if they could then there would be no need for 6. It might also be that the ‘early’ stage is relative as the failure occurs part way through a predicted life span, and this may be down to poor design or implementation.
These latent failures reveal themselves in a short time after first use of the device.

Random Failure
Once the early failures have been eliminated, the failure rate stabilizes at an extremely low level, but latent failures may reveal themselves at random over a long time and thus their number does not decline to zero.

Wear-out Failure
This is the period where the devices fail due to wear, fatigue, and so on, with the failure rate rising over time, and this is a main aspect of the area we are trying to tackle.

At Ferryport we design systems to accommodate a number of different skills sets:
1.      Basic daily checks – machine operators
2.      Regular inspections – machine setters and fitters
3.      In-depth maintenance – Supervisors, specifically trained mechanics
4.      Specialist Support – vibration analysis, oil analysis
These can all obviously be integrated into one comprehensive system. Previously we have been involved with very large TPM projects that have been integrated into spare parts and stock systems, for instance a fully comprehensive system will give a good indication of when a bearing may be deteriorating and you can then order up this spare part rather than holding it as stock. For more expensive or difficult to obtain spare part items we can develop a system whereby we liaise with your preferred supplier to ensure that the component is held on their shelves on a consignment basis.
​
The following page shows an example of a set of checks that require to be carried out, in this example by a Line Technician with additional help on one check by a Mechanical Technician
Oils - Defence - Health Service - Engineering - Chemicals - Food and Drink - ﻿﻿Manufacturing ﻿﻿- Business Improvements - Casting