The ferryport group
Single Minute Exchange of Dies (SMED)
As a training package we would prefer to run this course in your own workplace in order that we can actually have a proper hands-on analysis of the issues that are affecting you and we can point out areas of improvements as we work through the project.

The best SMED projects are generally quick and easy to implement, and Ferryport like to work on the organisation of the workplace in the first instance, with any capital expenditure occurring at the latter stages, or as we would have it - '£No-2-Low'.
Simply, we are trying to reduce the amount of stoppage time taken up by changeovers to a single minute. Having said that it would be more correct to say single minutes :- less than ten.
You will know that in most cases, a machines working hours can be split into three distinct sections: Production, Maintenance and Changeovers. 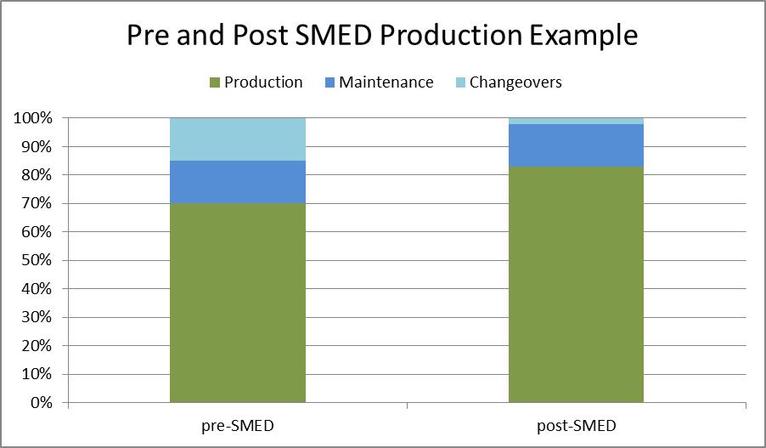 This second column shows a reduction in downtime due to SMED projects, with an equivalent increase in Production. (In heavier industries there may also be a lot of time lost through issues concerning dies, such as specific maintenance problems, however in the main there are only really three areas. Die issues should be addressed through a specialised maintenance program – CBM or TPM. 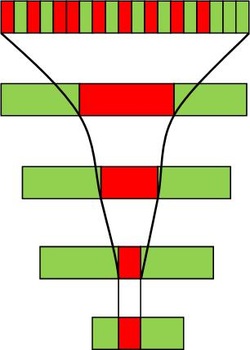 The Following diagrams show the stages involved in a basic SMED project:
These changes were implemented at No Cost Whatsoever.
Note that a few stages have been missed out here for clarity.

Initial Analysis showing the mix of Internal (I) and External (E) times. Each of the individual step times are shown in Blue.
The initial analysis here was 2 hours 21 minutes.

Organisation of Internal and External actions showing the External items that are required to be in place before the machine is switched off. We also implemented a few changes to the order of actions.
This brought the time down to 1 hour 49 minutes.
Analysis of Internal Actions.  We have re-organised the actions that can only be completed when the machines are switched off, and this allows us to reduce the time further.
This reduced the time by almost 20 minutes, which brought the time down to 1 hour 29 minutes.
﻿﻿Improvement of Internal Actions, ﻿﻿which reduced the time even further.
This brought the time down to 46 minutes for No Costs - just through careful analysis and organisation.
Oils - Defence - Health Service - Engineering - Chemicals - Food and Drink - ﻿﻿Manufacturing ﻿﻿- Business Improvements - Casting